Skip to content
A woman laughs with wide eyes as she enters a yet-unnamed gallery in Dallas’ Tin District featuring Techne, a collection of works by artist Robert Weiss. She puts a hand over her mouth as she approaches the first painting she sees, which depicts a crisp, Antebellum-style room; in the center, an elderly woman with a weathered stone face — a statue — holds a shotgun, glowering.

“It reminds me of my great grandma,” the woman, whose name is Tolly Salz and who works as a teacher with Weiss, says of the work. “She shot and killed someone with a shotgun, protecting her two children. It’s like an old, Texas story.”

Since his debut exhibition, Ongoing, opened last year, Weiss’ approach toward art shifted visibly in style and vigor. The artist, who still went by his nickname “Bobby” at the time of his first official show, opened his first solo exhibition in Dallas on Nov. 13 at 2506 Sylvan Ave. Techne runs until Dec. 13, and is by appointment only.

Support the independent voice of Dallas and
help keep the future of Dallas Observer free.

Those who viewed Weiss’ prior showings would have assumed the new exhibition was the work of a strikingly dissimilar artist. Though just a year ago, Weiss, who spent his earlier years as an artist making documentaries and teaching art at the Episcopal School of Dallas, was just coming into his full representation as a painter.

His artwork in Ongoing looked predominately at interior spaces, applying techniques of realism and precision with undeniable clarity. His paintings depicted rooms with varied articles and furniture, one being perhaps his most well-known painting, “Inner Sanctum,” of a dusty attic, empty except for a small, vintage crib-style bed covered in messy, white sheets posed eerily in the center. His current works, however, explore many styles and genres. 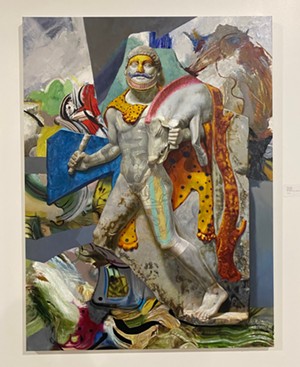 “I’ve been thinking about directors, how they place the cameras,” Weiss says. “My favorite is Kubrick, how he jumps between genres. I believe he did Barry Lyndon right after he did A Space Odyssey. Both of those films were handled in a way that complemented the subject matter. I try to do the same with my own work. It’s thematic, and the technical narrative follows closely behind.”

Weiss’ methodical training is evident in Techne. A category of their own, the portraits in this collection primarily feature classic representations, stone sculptures painted with exquisite accuracy surrounded by contrasting imagery and a variety of unexpected themes.

“I’ve been really tapping into not just a lot of Greek statuary, but all styles, really,” says Weiss. “Incorporating a bunch of pieces of art history.”

A closer look at each piece reveals this tactic: Greek statues that stick out and immediately draw the eye are sometimes textured with tribal and graffiti-like designs — decorative floral motifs and uncanny shapes and colors explode around them, hints of surrealism and abstract expressionism mingled throughout.

Though it may seem like a lot, somehow the overflow of themes work congruently together in a postmodern fusion of style, history and technique.

Weiss’ creative exploration gives the sense that the artist and the observer are learning together, adding additional value to the experience. Precisely like the name suggests, Techne is an exposé of craft, one man testing his own aptitude.

“How far can I push my abilities, and what direction can I push them into?” Weiss asks, mostly to himself. “I had a few paintings on the Greek statuary stuff, but I actually intend to go back to the interior spaces at some point. I’m thinking of what holes I want to fill in my own repertoire.”

Robert Weiss shows his methodical attention to technique in a Dallas exhibition running until Dec. 13.