For a long time, it seemed like Ron Gilbert would never have a chance to make another Monkey Island game. The series continued past the first two installments he developed after he departed Lucasfilm what feels like a century ago, but there remained a tiny glimmer of hope from the rabid fan base that somehow, someday, he’d make another sequel. Surprisingly, it’s actually happening (thanks, Disney!)—Return to Monkey Island is due to release this year. Even more surprising, though, is the criticism being levied on the art style.

Though the series continued after Gilbert left the building, Return to Monkey Island is confirmed to pick up where Monkey Island 2: LeChuck’s Revenge left off. In some respects, it’s the sequel that was always meant to be. But it’s also something completely different, as is natural with so much time having past. And it’s the art style that is taking center stage rather than what challenges and shenanigans await Guybrush Threepwood.

In addition to a short trailer, there are a few screenshots floating around that tease the upcoming game, which were first posted by Adventure Gamers (along with an interview with Gilbert). Reactions have been mixed so far—some comments have been highly critical of the art direction, while others appreciate the look and/or are just happy that Gilbert is embarking on this venture. I find myself in the latter camp.

The criticism is perhaps louder and more plentiful than Gilbert and his team expected. He addresses this in a recent blog post, saying it looks exactly the way he wants, which is “provocative” and “shocking.”

“I wanted the art in Return to Monkey Island to be provocative, shocking, and not what everyone was expecting,” Gilbert says. “Rex is an amazing creative force and we have a team of incredible artists, animators, sound designers, programmers, and testers all pouring their souls into this game and it’s beautiful to see, play, and listen to.”

He also acknowledges that the art style may not be what some fans of the Monkey Island series wanted or were expecting, and expressed disappointment at some of the more vocal criticism.

“It’s ironic that the people who don’t want me to make the game I want to make are some of the hard core Monkey Island fans. And that is what makes me sad about all the comments.
Return to Monkey Island is an incredible rollercoaster. Get on and have some fun or stomp out of the amusement park because it’s not exactly the rollercoaster you wanted,” Gilbert says.

That may come off a bit rough, but I don’t think it’s intended that way. And as most of us can attest, it can be mentally draining to take on a project you’re excited about, only to be criticized before it’s complete. It’s a buzz kill.

Incidentally, for those who want a modern pixel art game with the old school Lucasfllm/LucasArts flair, Gilbert went down that road with Thimbleweed Park, and it’s a blast. He also points out that the first two Monkey Island games weren’t pixel art games, even though that’s how many of us remember them. It was a different time back then, and those games were “using state-of-the-art- tech and art.”

“Monkey Island 1 was 16 color EGA and we jumped at the chance to upgrade it to 256 colors. Monkey Island 2 featured the magical wizardry of scanned art by Peter Chan and Steve Purcell and we lusted to keep pushing everything forward,” Gilbert explains. 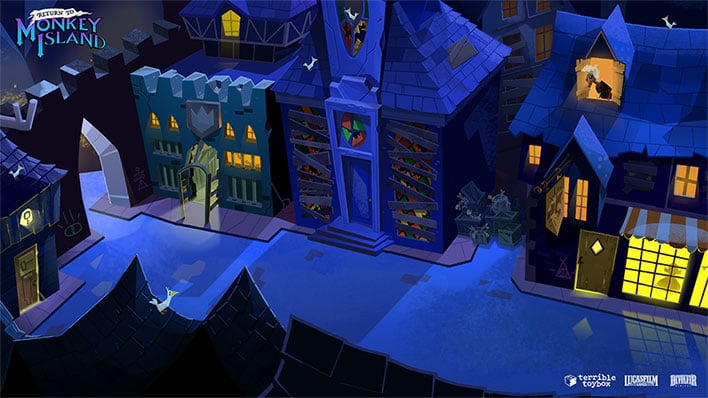 Had he stuck around Lucasfilm to work on a third installment, he says it would not have looked like Monkey Island 2, and points out that Day of the Tentacle is a good example of this point. The Maniac Mansion sequel looks nothing like the first game, yet is fondly remembered like others from that era.

Gilbert also makes clear that he wants Return to Monkey Island to not just be a “throwback game,” a descriptor that often gets applied to Thimbleweed Park, and that’s fair. After all, it’s been over 30 years since that game came out.

You can read Gilbert’s blog entry for his full thoughts, and then sit back and wait to see how the game unfolds when it comes out later this year.

The Most Valuable Photography Collections in the World