During the 1880’s, Blakelock carried on painting.  He still derived pleasure from painting and showed his work at various exhibitions.  Often, unable to pay the rent, Blakelock was repeatedly forced to move his large family from home to home in northern New Jersey and Harlem including a period of time spent with his in-laws who lived in Brooklyn.  His wife, Cora, gave birth to more children. The seventh-born, Ruth, arrived in 1893, the same year that Blakestock exhibited some of his work at the World’s Columbian Exposition in Chicago.  In 1897 Cora and Ralph’s eighth child, Allen, was born.  During his ongoing mental health issues brought on by the financial stress of not being able to feed his family, he fluctuated in and out of lucid periods, but he still managed to capture beautifully haunting scenes of moonlit skies, glades of leafless trees and multicoloured streaks of clouds.

The demands of housing and feeding his family continued to worsen his mental health.  In his 2003 biography of Blakelock, entitled The Unknown Night: The Genius and Madness of R. A. Blakelock, an American Painter, the author Glyn Vincent, described Blakelock’s eccentric behaviour at that time:

“…Mr. Blakelock began grandiosely adding price tags of millions of dollars to the backs of his paintings. He based his images on scratches in his enameled bathtub; started carrying around an antique dagger; and draped himself in embroidered sashes and belts with trimmings that his wife described as “long strings of beads and trinkets of all sorts…”

In 1899, on the day of the birth of his ninth child, Douglas, Ralph Blakelock was once again sectioned in a mental ward at the Long Island State Hospital at Flatbush. He was later transferred to Middletown State Homeopathic Hospital in June 1901, where he was treated for dementia praecox, which we know today as paranoid schizophrenia, leaving his wife and children destitute. Initially he was confined to a secluded ward but later was placed in an open ward where he had the freedom to move about the grounds and even visit the nearby village.  This was just the beginning of an increasingly unbelievable story.

There now follows a strange twist in Blakelock’s life. Almost as soon as Blakelock went into the Long Island State hospital, his works began to receive recognition from the critics especially after his one-man exhibition of his work at the New York Lotos Club in December 1900. Further exhibitions at the prestigious club followed including one held in September 1902 for Exhibition of paintings by Ralph Albert Blakelock, from the collection of Hon. Frederick S. Gibbs.

Within a few years Blakelock’s paintings that he had once sold for a pittance were being resold for several thousand dollars.  It is so ironic that the moment of his greatest triumph with his art came while he was sectioned at the Middletown hospital. On February 21st 1916, his painting, Brook by Moonlight sold at auction, part of the Catholina Lambert collection, for $20,000.  This, at the time, was a record amount ever paid at auction for a living American artist.   Later in 1916 he was finally elected to full membership at the National Academy of Design.

Beatrice Sadie Filbert was born in 1884 in the town of Fishkill, sixty miles north of New York.  Her mother had been employed as a servant and Sadie never attended state schooling but was educated for a number of years at the home of her mother’s employer.  When she was sixteen, she and her older sister went to live in New York.  Two years later, in 1902, she married Louis Adams whom she described as a Chicago millionaire.  Louis actually had rich relatives but none of their wealth ever came to him and he was “a person of interest” to the Cincinnati police.  He went by a number of aliases as he plied his trade as a scam artist and swindler who had taken money from many unsuspecting and naive women.    It is thought that Sadie was complicit in many of his scams.  In October 1906, Louis Adams was convicted and jailed for his crimes and their two children were temporarily taken into care at an Albany orphanage.  Two months later the younger child, a daughter, died of diphtheria.    Sadie was heartbroken and managed to remove her son, Van Rensselaer, from the care facility.

Sadie or Mrs Van Rensselaer Adams, as she liked to be called, now gained money by writing begging letters to wealthy prominent people, mainly men and this soon led to a duplicitous lifestyle similar to that of her jailed husband. Two such wealthy philanthropists who gave her money to cover her living expenses as well as a loan whilst they pondered over how best to help her were Henry P Crowell of the Quaker Oats Company and Harold F McCormick of the International Harvester Company, the son of Cyrus Hall McCormick, an American inventor and businessman who founded the McCormick Harvesting Machine Company, which later became part of the International Harvester Company in 1902.  McCormick was also treasurer of International Harvester subsidiary, Wisconsin Steel Company which leased mines including the Victoria Iron Mine of which Mrs Adams had an eighth share which it is believed she had acquired from her husband.  Wanting to see her prosper legitimately they arranged for her to embark on a three-year nurse-training course at the Michael Reese Hospital in Chicago.  She was not enthused by the nurse training and lasted just seven months before quitting, citing the ill health of her son as her reason for leaving.

Sadie Adams left Chicago and returned to New York but still kept close to wealthy philanthropists.  Here she involved herself in fundraising for the women’s division of the endowment association of Lincoln Memorial University, Tennessee.  She would send out begging letters for financial contributions including ones to President Taft and President Woodrow Wilson.  In the Spring of 1916, she became aware of the extensive publicity surrounding Ralph Blakelock who was languishing in a mental institution.  One such article appeared in the Washington newspaper, the Tacoma Ledger, dated May 14th 1913 in which an imaginary illustration depicts Blakelock in his cell at the Middletown (New York) State Homeopathic Hospital

Mrs Van Rensselaer then began to involve herself with Blakelock’s friends and help organise an exhibition of his work and the money raised would go to achieving his release and provide for him and his family once released from the asylum. It was also a trust, which purported to help the poverty-stricken artist and his destitute family. She contacted a young newspaper reporter, Harrison Smith, who was working for the New York Tribune, and told him about Blakelock.  Smith then went to visit the artist at the mental hospital.  The young journalist found the artist to be lucid and yet rambling and reported that Blakelock was fantasising about an imagined “diamond of the Emperor of Brazil” which he said had been stolen from him.  The journalist believed that Blakelock’s claim to be a great artist was not being believed by the asylum authorities or staff and so arranged for the artist and the asylum director to visit Manhattan where a gallery was holding a retrospective of Blakelock’s work.  The rookie journalist was hailed for his major news story despite omitting the part in which Blakelock had told him that some of the paintings on show at the gallery were forgeries.  In an account given by Smith many years later he said that he had omitted Blakelock’s comments as he believed Blakelock’s sanity at the time was in question.

By now Adams had assumed absolute control of the Blakelock Fund, which was reputed to be $35K,  and in early September 1916, she, with the help from money she took from the Fund, managed to afford to move Blakelock from the Middletown Hospital to a bungalow studio at a private sanatorium in West Englewood, New Jersey.  Not only was the money used to facilitate the move it allowed her to lavishly furnish the place and bring in large canvases, paints and brushes so that Blakelock would continue to paint more masterpieces which she could sell.  The newspaper headlines at the time read:

Adams realised that Blakelock could be her cash-cow and took on the sole control of his artistic output.  Adams maintained that it was all done for Blakelock’s benefit and she said in a gesture of his gratitude Blakelock painted a rough sketch on cardboard which he gave to her.  It was unsigned but on the reverse, Adams had written:

In the depiction we see the couple standing in the moonlight, surrounded by woods and mountains, at a gateway which probably leads symbolically away from the Middletown Asylum.

Adams managed to limit visits to him from his family and even had his wife Cora sign a waiver of her right to contest the guardianship as Adams had told her it would be best for her husband to be under Adams’ guardianship.  Adams also promised Cora that funds would be released to her and her family to move to a more respectable residence and which would be fully furnished.  Cora never received this promised payment.  The family tried to visit Blakelock but Adams always blocked their requests and even moved Blakelock to a new, but secret, sanatorium so they even lost contact with him.  She even returned Blakelock to the Middletown Asylum when the money ran out or as a punishment.  By the Spring of 1919, Blakelock had become fearful of Adams and her wild physical tantrums and decide he would be safer at the Middletown facility.  However on July 2nd 1919, Adams managed to extricate him from that safety and back into her custody for the last time.  A month later, on August 9th 1919, seventy-one-year-old Blakelock was dead.  Cause of death was given as a stroke or heart attack.

Such a sad end to the life of an extremely talented artist.

For a full account of the relationship Sadie Filbert (Beatrice Van Rensselaer Adams) had with Blakesock you should try and read an excellent twelve page article written by Dorinda Evans, entitled Art and Deception: Ralph Blakelock and his Guardian which appeared in The American Art Journal (Volume 19, No.1 Winter 1987). I discovered the article at the JSTOR website. It is a fascinating read and supplied me with so much information for this blog.

Just someone who is interested and loves art. I am neither an artist nor art historian but I am fascinated with the interpretaion and symbolism used in paintings and love to read about the life of the artists and their subjects.
View all posts by jonathan5485 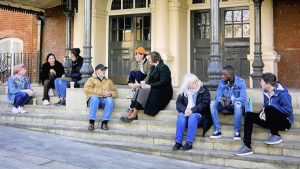