Pittsboro, N.C. — From the floors to the rafters to the grounds, every bit of it is art. That was the plan and that is what has been achieved by combining the Oddco art gallery and store, The Kindred Gallery and The Small Museum of Folk Art all on one site in Pittsboro.

Each entity on the site brings a different type of art to the public’s eye but one thing they all have in common is that they offer outsider art, meaning art that would not typically be carried in main stream galleries.

Oddco (short for The Odd Company), which opened in February of 2019, is a curated gallery and retail space filled with an ever-changing inventory of illustrative, pop-surrealist art. “I think it’s other worldly, fantastical and pop-culture-related so it can be something from anime, popular movies – something that was heavily influenced by those things,” says owner Cristina Virsida. “It’s definitely contemporary, new art from artists currently working.” 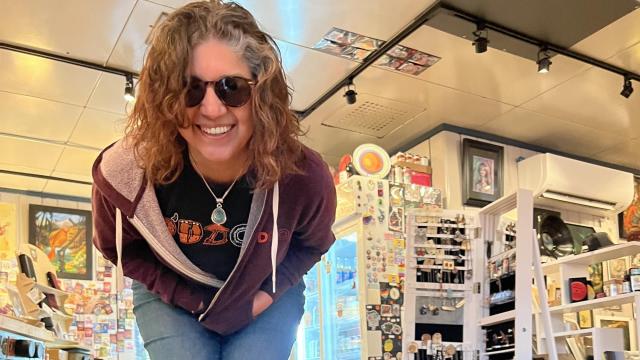 Art found in Oddco is expressed through unique art and gifts, jewelry, local hand-crafted clothing, unusual custom-designed home goods and furnishings. As many as 80 artists are currently represented; about a fourth of them are from North Carolina, according to Virsida.

“The shop is constantly changing,” says Heather Buster of The Kindred Gallery. “Cristina is so incredibly gifted in visualizing the space and knowing where to put things. People really love to just come in and see what’s she’s done with the place, now.”

The Kindred Gallery focuses on contemporary folk art created by self-taught artists. “We collect folk art from regional artists which is important to the folk art community,” says Buster who co-owns the collection with her husband, Jamie. “Every once in a while historic art by folks that are no longer with us pops up.” 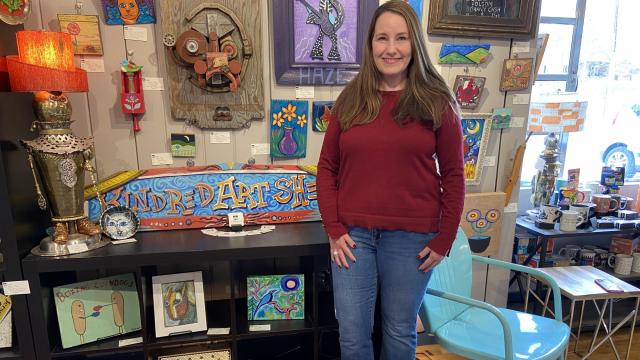 “Artists in the gallery are kindred spirits,” says Buster. “They have an idea and want to make something and it’s interesting. Each has traveled and shared their art with the public, earning their livelihood.”

Large pieces such as various types of sculpture are often in the collection. Inclusion of The Kindred Gallery in the Oddco gallery space allows the collection to be available to the public for the first time. Previously, parts of the collection were housed either at the Buster’s private home or at The Rosemary House, a Bed & Breakfast Inn in Pittsboro which they owned between 2017 and 2021.

The folk art collection in The Small Museum of Folk Art started with a gift of more than 400 folk art pieces that had been gathered over a 30-year period by the late UNC botany professor, Jim Massey, an avid folk art collector. During his last years, he became concerned that the collection would either be unceremoniously disposed of or left to an institution that couldn’t properly display it. He sought someone that would receive the collection as a gift with the promise of showing it into the future. Dave and Lisa Clark accepted the mantle of carrying on the legacy of showing folk art. The Clarks, who owned the Small B&B Café at the time, had acquired a significant folk art collection of their own. In 2015 they established The Small Museum of Folk Art on the site of their Inn. The museum collection was moved, together with the unique building that housed it, to the Oddco site in August of 2021. The museum, just recently reopened, now holds approximately 600 pieces.

“There’s everything from bookshelves to whirligigs to paintings,” says Dave Clark. “There are tons of things that people make art out of – furniture, scraps, burnt-out logs. We also get some religious iconography, a big part of the folk art world.”

“We try to get art from people who are not from traditional art school settings,” says Clark. “A lot of artists just can’t do anything but paint or draw or what they love to do – draw, sculpt or make found-object art.” 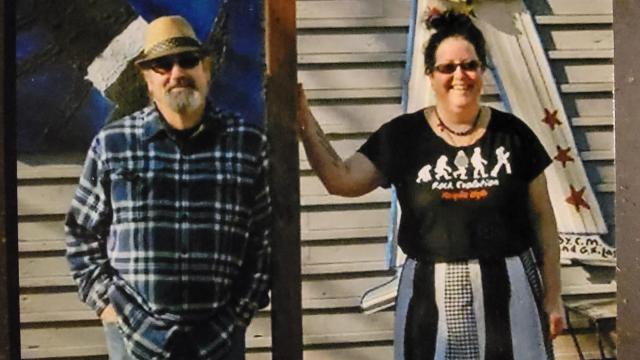 Through their collecting and travels, the Clarks have seen a lot including a full-size plaster-of-Paris sculpture of Barack Obama sitting on a couch in artist, Juanita Leonard’s living room in Louisiana.

While the interiors of most art establishments are filled with art, the structures that Oddco, The Kindred Gallery and The Small Museum of Folk Art occupy are equally art-worthy.

The Small Museum of Folk Art collection fits inside a small, rectangular, box-like building that was constructed at the UNC-Charlotte Building Department for the art department with the help of its students. Several such buildings were crafted to be super strong and perfect for traveling. The university used them as roving galleries to take art to underserved areas. Years later in 2011, the Clarks found the buildings on Craigslist and purchased three for their Inn – two were used for bed & breakfast rooms and the third became home to The Small Museum of Folk Art. 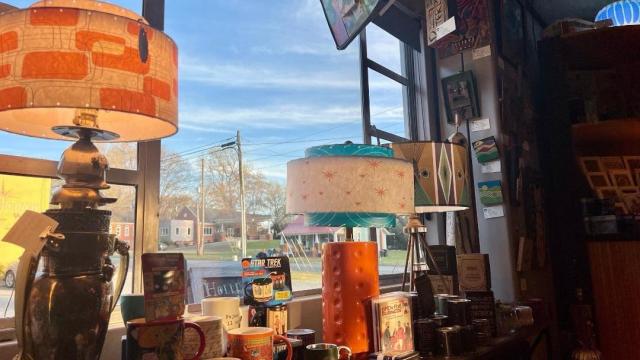 Oddco and The Kindred Gallery are housed in a Lustron Home, one of 2500 that were built by an Ohio company between 1948 and 1952. The company, which manufactured airplane parts for WWII efforts, sought to find another way to use their tools and equipment once the war was over. The house kits they developed were comprised of enameled steel – interior, exterior walls and roofs, all metal. There were no load-bearing walls on the inside, making it easy to remove interior partitions to facilitate open, commercial space. This is the conclusion that Steve Carr, owner of Carr Amplifiers, came to. Carr owns the Lustron home and all of the property that is occupied by Oddco and now, The Small Museum of Folk Art. He also owns several other commercial properties, in and around downtown Pittsboro. At the time Carr purchased the home, it was located approximately 1,000 feet away across the road. He had the house moved to its current location beside New Horizons West outdoor sports store and Phoenix Bakery both of which he owns.

The Lustron home was originally purchased by a Pittsboro family whose members continued to live in the house for seventy years before it became abandoned, according to Virsida. History buffs will enjoy some Lustron memorabilia on display in Oddco.

“When my wife, Sarah, and I looked at moving the Lustron home, we started looking for interesting people to go in it,” says Carr. “Oddco is a perfect fit.”

Another fun element of the Oddco space is the maple floor Carr purchased that had been in a 1970s roller-skating rink. “If you look, you can see the lines of the former roller rink,” says Carr.

Not the least of Oddco’s charms is its status as a gathering place where patrons can sit outside on the front patio or in the backyard at picnic tables and enjoy a variety of craft beers, wine, hard kombucha, mead, ciders, coffee and more. This Spring the backyard called the ‘Oddco Sideshow’ will come alive with music, parties and a variety of special events and performances. A new ramp and decking make for easy access between Oddco, Oddco Sideshow and the Museum.

All parties involved in the Oddco site endeavors agree that coming together will increase visitor traffic, event attendance, art sales and donations. “It’s a fantastic collaboration of people all motivated by art,” says Clark. “The thing I’m most excited about is making people aware that folk art exists,” says Buster.

Getting to this point has required endurance, ingenuity and a lot of patience in the past two-to-three years. Many arts establishments, in general across the country, have been adversely affected by real estate markets. Small businesses, including many in the area, have struggled against an unfavorable economy. Political unrest around the removal of Confederate statues in downtown Pittsboro stalled tourism to the town for a significant period followed by the devastating economic effects of the Covid pandemic which caused business closures and losses. Oddco, just as it was starting out, was forced to close up shop for a time. With lack of public access for an extended period, establishments such as The Small Museum of Folk Art had to survive with greatly reduced donations. Industry demands on government and contractors slowed construction and renovation efforts.

Keeping folk art alive in Chatham County has been a labor of love by many like-minded individuals and organizations whose close relationships and affiliations have developed a strong community of folk artists and folk art promoters. “We named the gallery The Kindred Gallery because we felt such a connection to Pittsboro and the people of North Carolina and the artists we know,” says Buster.

Famed painter and woodcrafter Clyde Jones and local-area musician and carpenter Stephan Meyers are among the people who have greatly furthered and aided the folk art movement. The annual Fearrington Folk Art Show brings together a diverse group of self-taught, outsider artists from the folk art world. Organizations such as the Shakori Hills Community Arts Center and the Chatham Arts Council have been closely involved in community education and providing public access to folk art.

As for the offerings of Oddco, The Kindred Gallery and The Small Museum of Folk Art, some might call the whole thing odd but many others will call it art – inspiring, colorful, uplifting, enriching, often informative art.