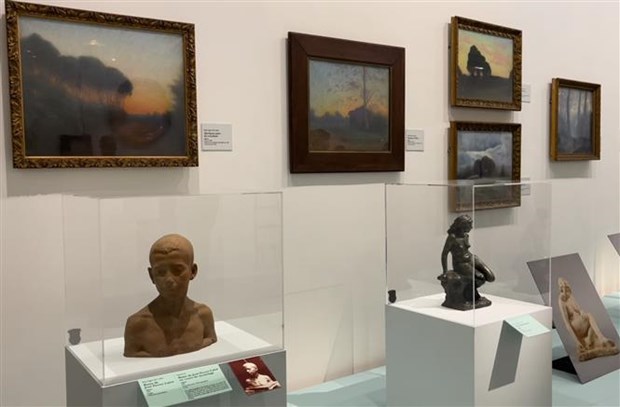 Paris (VNA) – An exhibition of 150 art works and objects of Vietnamese King Ham Nghi (1870-1947) is taking place at Nice Museum for Asian Arts in France.

The exhibits were collected in nearly 10 years by
Amandine Dabat, a 5th generation descendant of the king, who did a
doctoral thesis on King Ham Nghi’s art career and is also the author of the
book “Ham Nghi – Empereur en exil, artiste à Alger” (Ham Nghi -
Emperor in exile, artist in Algeria) published in 2019 in France.

This is the first exhibition about
King Ham Nghi since his death. The last exhibition held by the emperor was in
1926.

The current exhibition aims to introduce to the public, both French and Vietnamese, a rather comprehensive
look at the life of the exiled patriotic king with the soul of an
artist and a sculptor, whose teachers were famous French artists.

Adrien Bossard, the curator of the Nice
Museum for Asian Arts, said the exhibition is a unique event because King Ham
Nghi is an Asian, but he followed the European impressionist art and developed
his career in Africa.

He said he exhibition not only gives the public a new and
interesting view of Asia, but also spotlights the historical significance
because the exhibits talk about a figure of royal lineage in Vietnam which was related
to the Indochina war and the French colonial period in the Southeast Asian country.

The exhibition has so far attracted 8,000 visitors, and it is
hoped to welcome 25,000 people by the end of June.

King Ham Nghi, whose real name was Nguyen Phuc Ung Lich, was the
8th emperor of the Nguyen Dynasty but only reigned for one year (1884 – 1885).

Though the emperor was popular as an anti-French emperor who was
exiled to Algeria, he was also a little-known painter that held exhibitions in
Paris.

His artworks are diverse, from oil paintings and pastels to bronze, plaster and
wood sculptures. Using his innate ability, he quickly learned and absorbed the
skills that were taught by famous sculptor Auguste Rodin (1840-1917)./.

ALICE STREET to Screen at ADFF This Weekend at Cinépolis Cinemas

What Business To Start

A Deep-Rooted Art Scene Is the Key to Santa Fe’s Magic – ARTnews.com

Will Power Pays Homage to Hip-Hop Culture in Chilltown