Meredith Moore is a treasure hunter. A self-professed “obsessive” with images, she is constantly seeking symbols in the everyday, finding her subjects—sometimes years before she uses them—and then creating unique ways to pay homage to them in short films that she creates with a hybrid of vintage and contemporary video equipment.

Moore arrived in Baltimore in 2006 from Oklahoma to attend MICA on an undergraduate painting scholarship, but fell in love with video after she took a class on a whim and hasn’t looked back. Moore has also fallen in love with Baltimore, a place she appreciates for its creative community that, beginning with members of the early 2000s art collective Wham City, has always welcomed her. While her films are not necessarily painterly, each one centers around a central subject, the way a representational painting does, and then uses the format of moving images to turn the subject over and showcase it in a new light.

“I’m always looking for interesting and new things that I’ve never seen. Like right now, I’m on TikTok a lot,” she laughs, describing her inspiration workflow. Moore is interested in TikTok for the way it can show a day of an average user in another country—the global access inspires the artist to think about mundane human commonalities beyond borders—what a teenager’s morning routine is like in Saudi Arabia, for example. “I know I do have a peculiar sort of goofy way of looking at things,” she continues, and she classifies this unique viewpoint based on questioning the everyday as her style across several recent films.

Film is a medium that demands an audience, but Moore doesn’t concern herself too much with what other people might think about her work. Since the experimental short film world isn’t particularly commercial, she feels free to make things primarily for her first audience, herself. “I do it for myself. This is just how I explore life and express myself,” she says. And the resulting works are extremely personal, focused on single motifs that Moore became fixated on for a time: glitter, a lone cat figurine, her grandmother’s salt shaker collection. Her work tells a story of real objects typically recast in an otherworldly way. She’s not a documentarian, and much of what she makes we could probably call “trippy” for her use of strobing, special effects, and a heavy dose of the absurd. She’s made music videos in collaboration with several prominent Baltimore musicians such as Ami Dang and Dan Deacon, and her work always has a sound element that is either musical or the spoken word.

Moore works full time as the Digital Curation and Audiovisual Archives Specialist at MICA, where she also teaches special effects in the Film and Video Department. This work keeps her busy, so it’s hard sometimes to carve out the time necessary to work on her own projects. For the past two years, she has been working on what will be a roughly twelve-minute film about her grandmother’s salt shaker collection. Moore filmed it pre-pandemic and has been playing with some of the footage in her teaching workshops, using clips of her grandmother using her walker outside and adding an explosion styled out of a Jason Bourne movie behind her. The effect is humorous, of course, but also bittersweet; her grandmother is now 94 and resides in assisted living, and her dementia has worsened quickly due to the isolation of the pandemic. Moore’s project has essentially become a time capsule of her grandmother before the COVID-19 pandemic. Centered on one woman’s collection amassed over a lifetime since 1947, the film is a love note to their relationship and a poignant reminder that it’s how we spend our time that ultimately becomes our legacy.

In her Charles Village studio last November, Moore and I talked about analog technologies, Baltimore’s music scene, and taking yourself seriously as an artist. 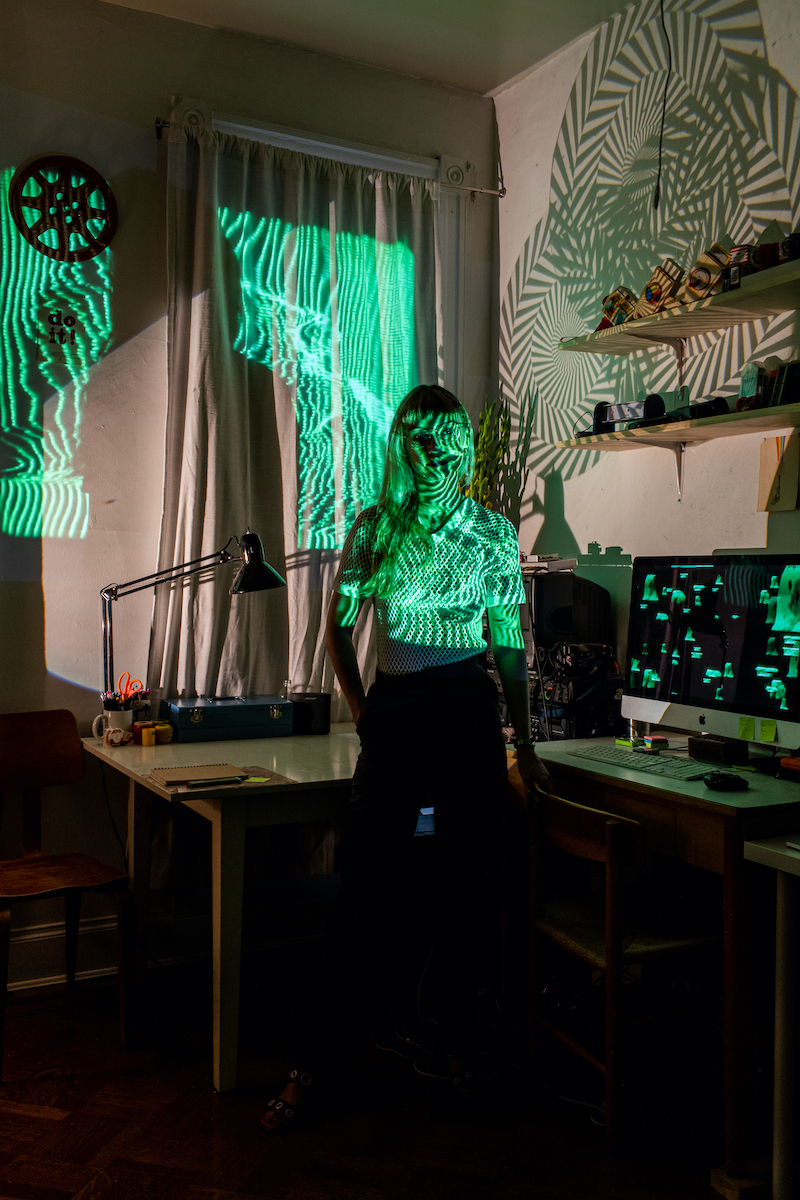